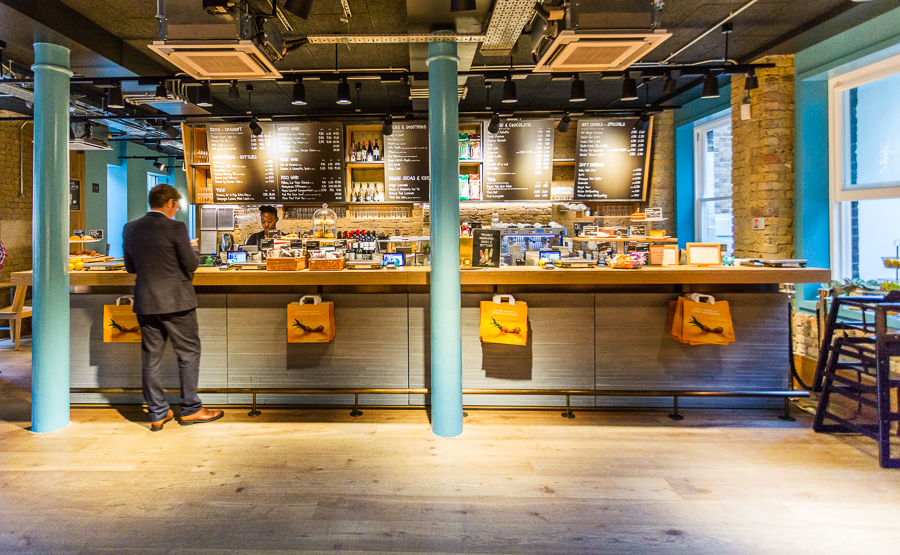 By Anton Constantinou and Francis Buchanan

Here at Central London Apartments, we’re always on the lookout for top restaurants in the city. Our appetite for good food has led us to some great eateries, where we’ve tucked into incredible food, and enjoyed cocktails of the highest order.

Recently, we’ve developed a bit of a love for vegan and vegetarian food, which has taken off in London at a remarkable pace. We’ve sampled vegan kebabs, gorged on plantain burgers, and got our chops around the tastiest jackfruit carnitas money can buy.

Of all the vegan spots in London, Tibits is easily one of the best we’ve visited. Tibits is known for its buffet food, and serves up a delicious array of salads, soups, hot dishes, juices and deserts.

We were personally invited to review their bankside restaurant, located just minutes from Southwark station, and thought we’d share our experience with you:

Anton: “How cool is the restaurant’s location! I didn’t realise Tibits Bankside is situated so close to the Tate Modern.”

Francis: “Yeah, it’s nestled away in a really fascinating part of the city. So much has changed in Southwark over the last 20 or so years. It’s a particularly cool, easy-going part of the city and the restaurant is definitely a natural fit.”

Anton: “I’m guessing this restaurant must draw its fair share of city workers, given its location. There are lots of offices around Southwark, and the South Bank is just up the road!”

Francis: “Definitely. And with a takeaway option available, I’m sure many pop in for a healthy lunch to go.”

Anton: “As I recall, the restaurant is pretty modest looking from the outside, but I quite like that. The mint green façade really goes with the restaurant’s focus on fresh, light food.”

Francis: “The whole place is designed meticulously. The interior décor was really impressive.”

Anton: “Did you know that one of business partners behind Tibits - Rolf Hitl - co-founded the oldest vegetarian restaurant in the world?”

Francis: “I didn’t, but that doesn’t surprise me in the slightest. Tibits is all about offering vegetarians an abundance of choice. So many restaurants skimp on veggie options, so Tibits is essentially offering a lot where there is a significant lack. It’s a master plan that’s clearly been executed by a determined group!”

Anton: “How awesome was the restaurant’s buffet boat!? I wasn’t expecting such a vast array of world cuisine! There was so much to choose from!

Francis: “I’m a huge fan of North African and Middle Eastern food, so naturally I loaded up on falafels and hummus - which was incredible. The sticky toffee pudding was also dreamy!”

Anton: “To be honest, I don’t normally go mad for buffets, but Tibits surpassed my expectations. I especially loved the lemon hummus and the orecchiette pasta! What about you?”

Francis: “The buffet system works great. People are more conscious than ever about what they eat and how much they eat, so it’s nice to see a restaurant that allows you to choose how much you want on your plate.”

Anton: “I must say, I was really taken by the decorative plates on the wall in the conservatory area - I wonder who the artist is behind them? I also really liked the armchairs we sat in - which were super comfortable. What did you think of the ambience?

Francis: “The conservatory space was really cool. It was like being both outside and in your nan’s house!

Anton: “I’ve noticed that the restaurant had its own range of cookbooks – I wish I’d bought one!”

Francis: “Me too. Having written about a lot of vegan and veggie hotspots in London, I can see that it’s definitely becoming a really common trend. In my opinion, that’s one of the greatest things about vegetarianism. Everyone’s just as keen to share their knowledge and experience as they are to learn more about it!”

Anton: “I would definitely return here. With the food being on the healthy side, I would say it’s great for a business lunch, as it won’t leave you feeling sluggish in the afternoon.”

Francis: “Absolutely! Anyone who loves vegetarian food or is keen on trying something a bit different should definitely give Tibits a go. People often have this warped idea that vegetarianism is just indulging in a big bowl of iceberg lettuce, but that’s just not the case anymore.”

Tibits Bankside is open seven days a week, from 11am to 10pm - except on Sundays. To book your table, click here.