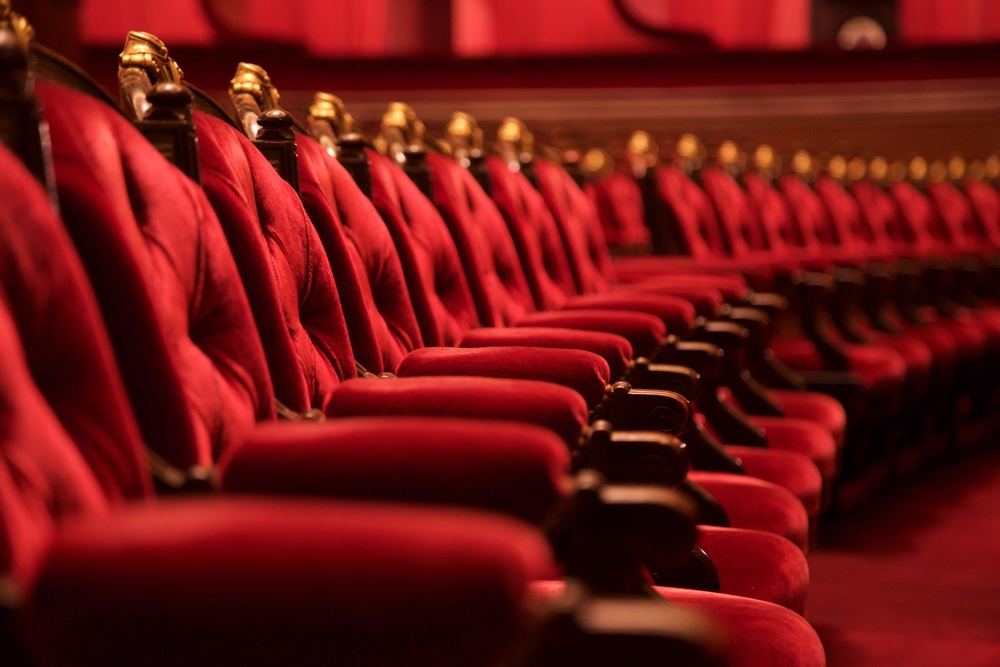 It’s entirely understandable that when people think of London’s esteemed theatre culture, they tend to think of the many wonders of the West End. However, what many people may not be aware of is the large number of theatres and mixed arts venues that can be found outside the city centre. These top 10 hidden theatres in London offer a fantastic range of experimental and adventurous on-stage dramas, musicals, concerts and comedy sets.

Away from the dizzying lights of Piccadilly Circus, Leicester Square and Soho, there are a host of theatres dotted about in a range of different hiding places. A few can be found in some of London’s most mysterious areas - in the city's disused railway stations and underground tunnels - while others have been founded in historic pubs and famed old buildings. Many of these venues are not only known for being bastions of creativity, but also popular community centres that offer individuals the chance to meet new people and even collaborate on artistic projects. 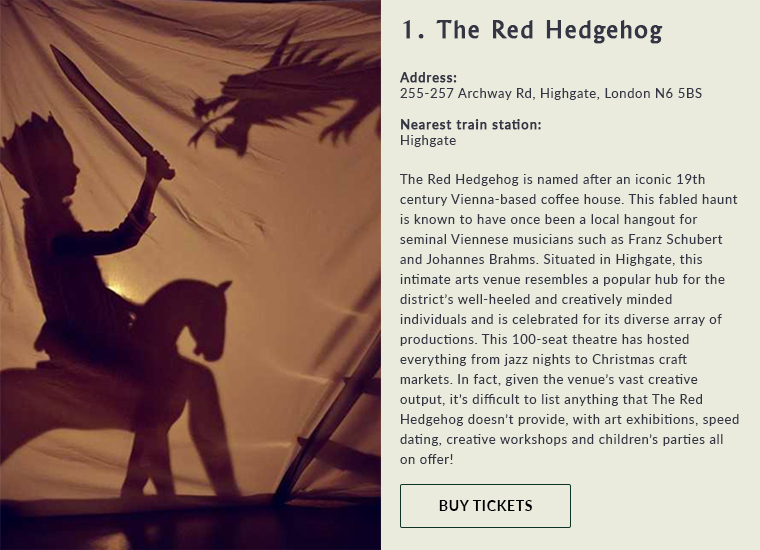 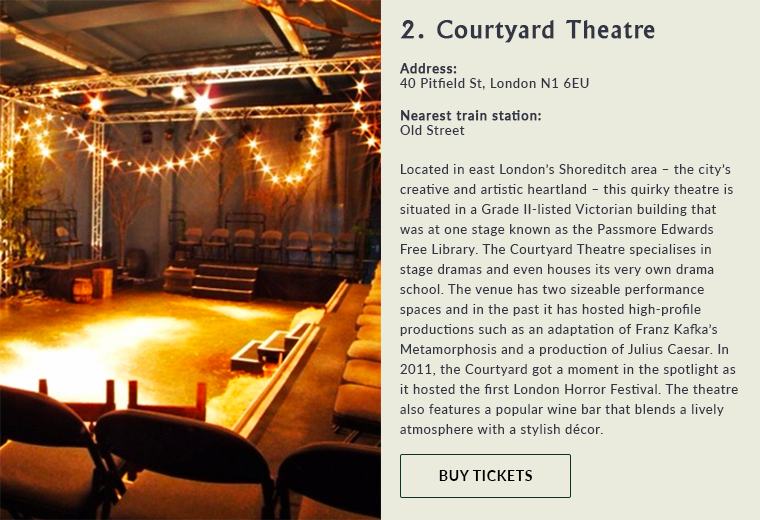 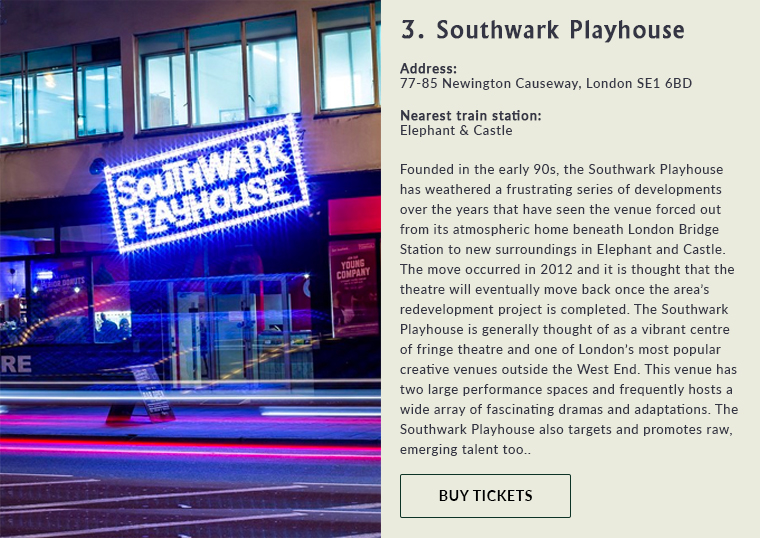 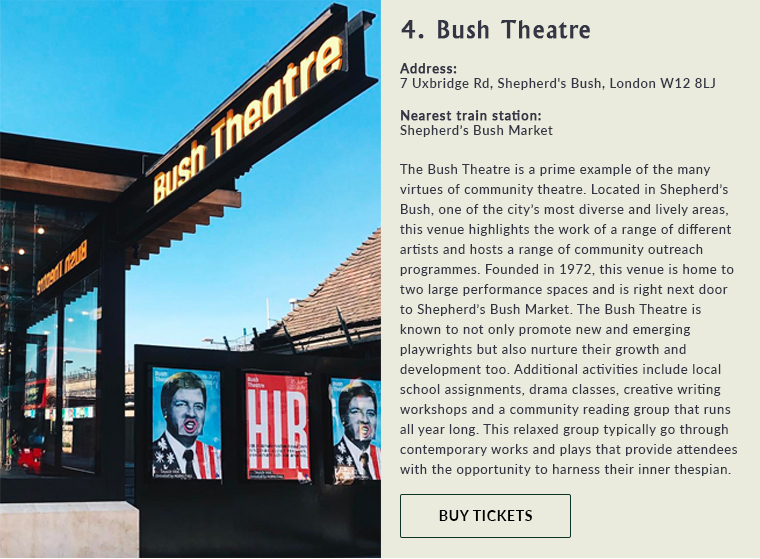 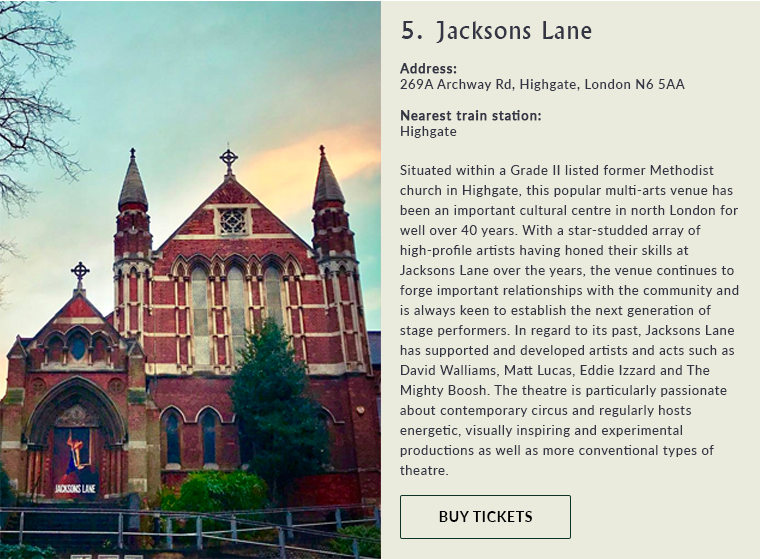 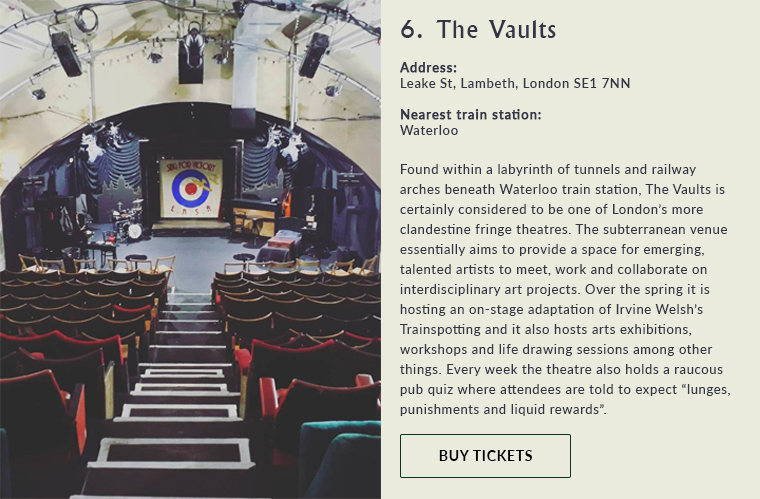 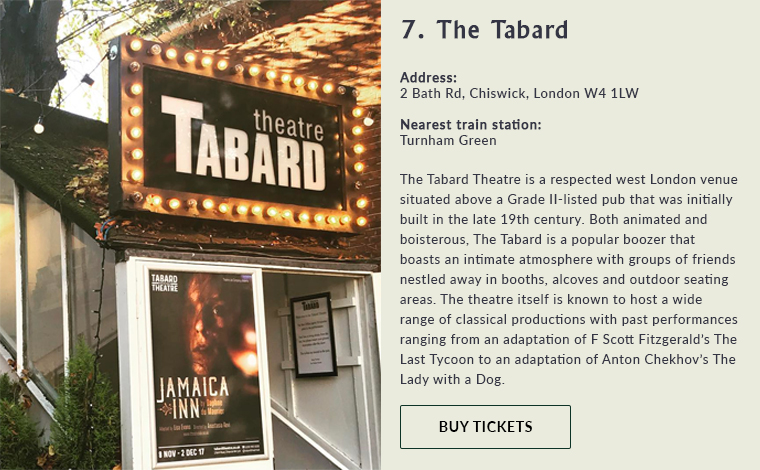 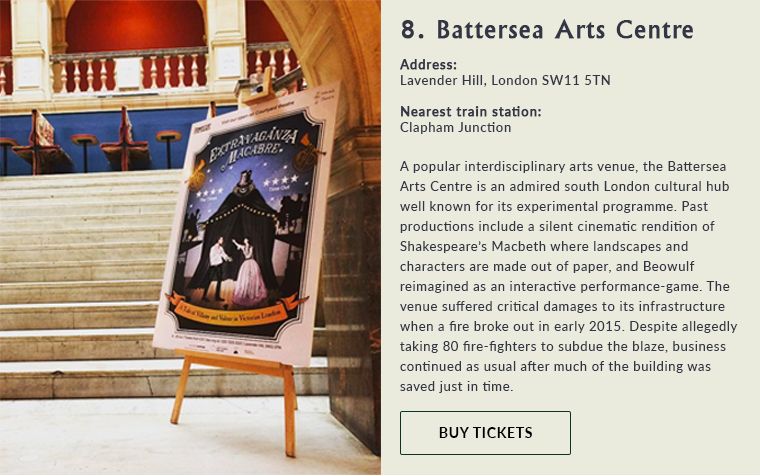 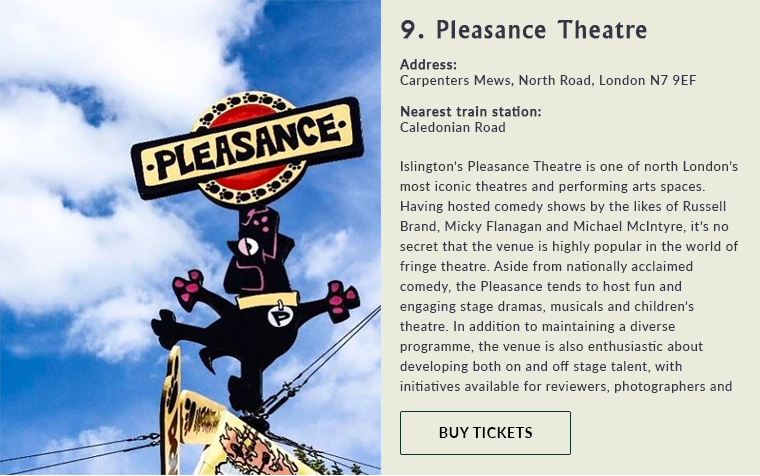 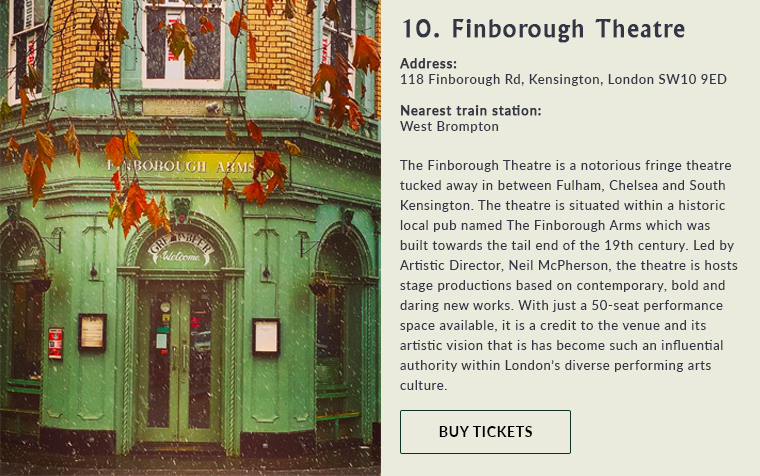 The Red Hedgehog is named after an iconic 19th century Vienna-based coffee house of the same name. This fabled haunt is known to have once been a local hangout for seminal Viennese musicians such as Franz Schubert and Johannes Brahms. Situated in Highgate, this intimate arts venue resembles a popular hub for the district’s well-heeled and creatively minded individuals and is celebrated for its diverse array of productions. This 100-seat theatre has hosted everything from jazz nights to Christmas craft markets. In fact, given the venue’s vast creative output, it’s difficult to list anything that The Red Hedgehog doesn’t provide, with art exhibitions, speed dating, creative workshops and children’s parties all on offer!

Located in east London’s Shoreditch area – the city’s creative and artistic heartland – this quirky theatre is situated in a Grade II-listed Victorian building that was at one stage known as the Passmore Edwards Free Library. The Courtyard Theatre specialises in stage dramas and even houses its very own drama school. The venue has two sizeable performance spaces and in the past it has hosted high-profile productions such as an adaptation of Franz Kafka’s Metamorphosis and a production of Julius Caesar. In 2011, the Courtyard got a moment in the spotlight as it hosted the first London Horror Festival. The theatre also features a popular wine bar that blends a lively atmosphere with a stylish décor.

Founded in the early 90s, the Southwark Playhouse has weathered a frustrating series of developments over the years that have seen the venue forced out from its atmospheric home beneath London Bridge Station to new surroundings in Elephant and Castle. The move occurred in 2012 and it is thought that the theatre will eventually move back once the area’s redevelopment project is completed. The Southwark Playhouse is generally thought of as a vibrant centre of fringe theatre and one of London’s most popular creative venues outside the West End. This venue has two large performance spaces and frequently hosts a wide array of fascinating dramas and adaptations. The Southwark Playhouse also targets and promotes raw, emerging talent too.

The Bush Theatre is a prime example of the many virtues of community theatre. Located in Shepherd’s Bush, one of the city’s most diverse and lively areas, this venue highlights the work of a range of different artists and hosts a range of community outreach programmes. Founded in 1972, this venue is home to two large performance spaces and is right next door to Shepherd’s Bush Market. The Bush Theatre is known to not only promote new and emerging playwrights but also nurture their growth and development too. Additional activities include local school assignments, drama classes, creative writing workshops and a community reading group that runs all year long. This relaxed group typically go through contemporary works and plays that provide attendees with the opportunity to harness their inner thespian.

Situated within a Grade II listed former Methodist church in Highgate, this popular multi-arts venue has been an important cultural centre in north London for well over 40 years. With a star-studded array of high-profile artists having honed their skills at Jacksons Lane over the years, the venue continues to forge important relationships with the community and is always keen to establish the next generation of stage performers. In regard to its past, Jacksons Lane has supported and developed artists and acts such as David Walliams, Matt Lucas, Eddie Izzard and The Mighty Boosh. The theatre is particularly passionate about contemporary circus and regularly hosts energetic, visually inspiring and experimental productions as well as more conventional types of theatre.

Found within a labyrinth of tunnels and railway arches beneath Waterloo train station, The Vaults is certainly considered to be one of London’s more clandestine fringe theatres. The subterranean venue essentially aims to provide a space for emerging, talented artists to meet, work and collaborate on interdisciplinary art projects. Over the spring it is hosting an on-stage adaptation of Irvine Welsh’s Trainspotting and it also hosts arts exhibitions, workshops and life drawing sessions among other things. Every week the theatre also holds a raucous pub quiz where attendees are told to expect “lunges, punishments and liquid rewards”.

The Tabard Theatre is a respected west London venue situated above a Grade II-listed pub that was initially built in the late 19th century. Both animated and boisterous, The Tabard is a popular boozer that boasts an intimate atmosphere with groups of friends nestled away in booths, alcoves and outdoor seating areas. The theatre itself is known to host a wide range of classical productions with past performances ranging from an adaptation of F Scott Fitzgerald’s The Last Tycoon to an adaptation of Anton Chekhov’s The Lady with a Dog.

A popular interdisciplinary arts venue, the Battersea Arts Centre is an admired south London cultural hub well known for its experimental programme. Past productions include a silent cinematic rendition of Shakespeare’s Macbeth where landscapes and characters are made out of paper, and Beowulf reimagined as an interactive performance-game. The venue suffered critical damages to its infrastructure when a fire broke out in early 2015. Despite allegedly taking 80 fire-fighters to subdue the blaze, business continued as usual after much of the building was saved just in time.

Islington’s Pleasance Theatre is one of north London’s most iconic theatres and performing arts spaces. Having hosted comedy shows by the likes of Russell Brand, Micky Flanagan and Michael McIntyre, it’s no secret that the venue is highly popular in the world of fringe theatre. Aside from nationally acclaimed comedy, the Pleasance tends to host fun and engaging stage dramas, musicals and children’s theatre. In addition to maintaining a diverse programme, the venue is also enthusiastic about developing both on and off stage talent, with initiatives available for reviewers, photographers and electricians along with creative and technical roles.

The Finborough Theatre is a notorious fringe theatre tucked away in between Fulham, Chelsea and South Kensington. The theatre is situated within a historic local pub named The Finborough Arms which was built towards the tail end of the 19th century. Led by Artistic Director, Neil McPherson, the theatre is hosts stage productions based on contemporary, bold and daring new works. With just a 50-seat performance space available, it is a credit to the venue and its artistic vision that is has become such an influential authority within London’s diverse performing arts culture.