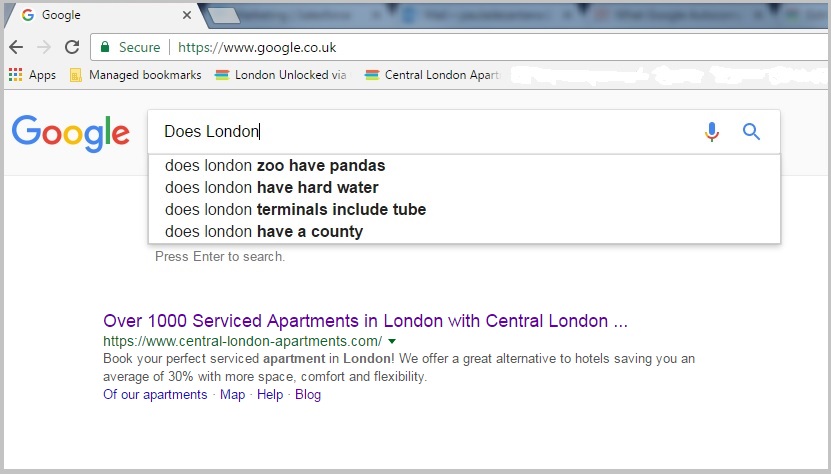 Do you know what we love the most about Google Autocomplete? Is it because it saves us time by finishing our sentences like our best friend? No! What we love is the secrets it reveals! As the search engine suggestions are based on what people have been searching for the most, a quick look into what people are asking about London has revealed some curious musings...

1. We have a secret fascination with serial killers

Where in London is Rillington Place – the top search happens to be the address of London serial killer John Christie, who murdered women and hid their bodies in parts of his house.

Does London zoo have pandas? There are over 750 species of animal at London Zoo. Pandas, however, are not currently one of them.

3. We are still trying to find ourselves

4. Some suspicious activity seems to be going on

London Drugs - ranked high… then we realised the search was actually about a Canadian clothing store by the same name in Richmond, Canada. Phew! London's reputation remains unblemished.

5. We have some curious questions about London

6. We want to entertain our children

Why London underground strike – you can feel the frustration in their voice here. London without social climbers How does anyone afford to live in London

8. And Brexit is a sore subject…

Can London stay in the EU

9. But then we regain faith

10. We love Manchester and Oxford…

12. But we are secretly competitive

13. And we definitely love a freebie

London for free – there is definitely plenty to do for free in London. Read our 50 Free Things to do in London post to find out more! Are London Museums free Stay in London for free - sorry, we can't help with this one, but we can find you an amazing serviced apartment at really good value for money if you want us to :)

So there you have it, what people have been thinking about London. And you thought the search engines were only being helpful!

*All content accurate at the time of searching. However, other factors can influence Google Autocomplete.