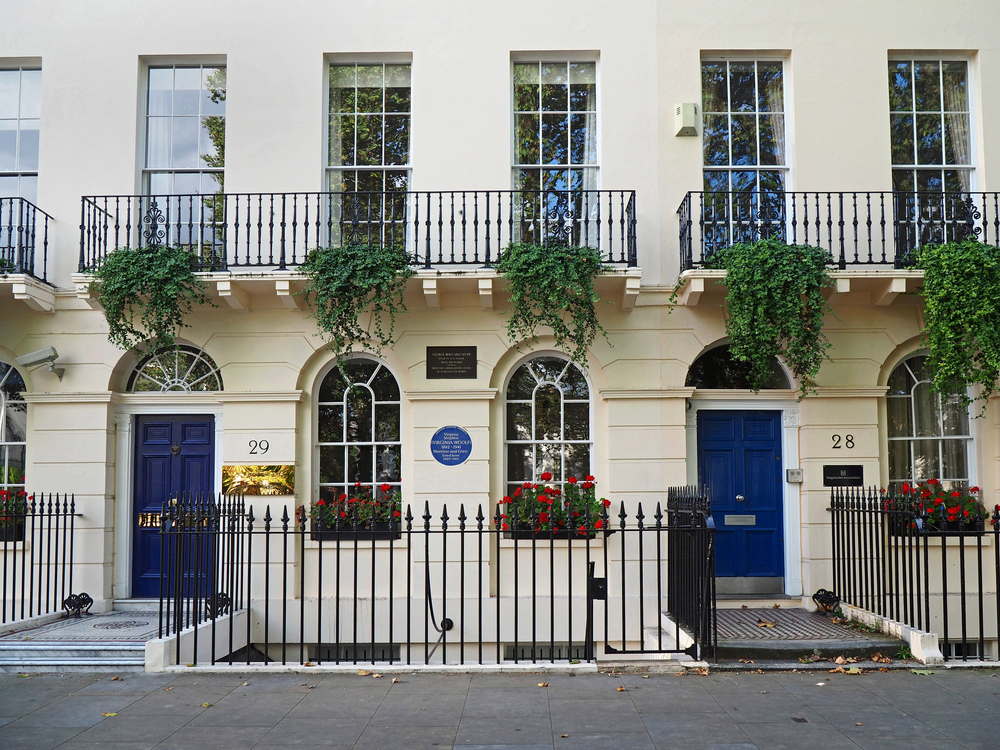 If you’ve ever taken a walk around London, you will have seen a fair few of the city’s iconic blue plaques. Indelible marks of success, status and stature, these plaques commemorate the lives of many of London’s most decorated residents. Here, we thought we’d take a look at some of the blue plaques in Kensington and Chelsea and show you where to find them!

A celebrated dancer from St Petersburg in Russia, Princess Seraphine Astafieva lived on the King’s Road from 1916 to 1934. She taught ballet and opened the Russian Dancing Academy in Chelsea. Her pupils included Anton Dolin and Margot Fonteyn. In T. S. Eliot’s poem, Whispers of Immortality, she is referenced as “Grishkin”.

Speaking of T.S. Eliot, you can find the famed poet’s former residence at Kensington Court Gardens. Tucked away in between Kensington and Knightsbridge, these charming red-brick mansions are surrounded by centuries of history and culture. T.S. Eliot lived here until 1965 when he died of emphysema at the age of 76. The blue plaque attached to the building’s stately façade perfectly commemorates the poet’s literary triumphs. If you’re on the hunt for blue plaques in the Royal Borough of Kensington and Chelsea, this is one is definitely a must-see.

Just a ten minute walk away from Eliot’s lodgings you can find the former residence of Eliot’s contemporary, Ezra Pound. In London during the early 20th century, Pound and Eliot spent a lot of time together forging a new poetic style that would later become known as the Modernist Movement. Found down a quiet alleyway close to Kensington High Street, Ezra Pound only lived at 10 Kensington Church Walk from 1909 to 1914.

Now for another Eliot that hugely influenced London’s literary scene… 19th-century writer, George Eliot, who wrote a range of iconic novels, such as Middlemarch, lived in a couple of different places around London. Due to this, her life is commemorated by two blue plaques in Chelsea and Wandsworth. Her lodgings in Chelsea overlook the elegance of the Chelsea Embankment and the River Thames.

It’s impossible to talk about London’s famed literary scene without mentioning one of London’s most popular playwrights – Oscar Wilde. Known for his witty sense of humour and his brilliant portfolio of plays, such as The Importance of Being Earnest, he transformed the literary landscape in London during his lifetime. Oscar Wilde died in Paris in 1900, aged only 46, but his life and achievements are immortalised by the blue plaque on Tite Street in Chelsea, where he boarded for some time during the late 19th century.

James Joyce, the visionary Irish writer behind Modernist classics such as Ulysses, Finnegans Wake and A Portrait of the Artist as a Young Man, lived on Campden Grove for just a short time in 1931. Although forever preserved by a blue plaque, it is known that Joyce actually disliked his time in west London and is said to have termed the street ‘Campden Grave’.

Cetshwayo, the 19th century King of the Zulus, stayed at 18 Melbury Road in August 1882 during a visit to Britain from South Africa, where he was being held as a British prisoner. This all happened in the wake of the Zulu war, which saw one of the worst British defeats to an indigenous opponent. Cetshwayo was warmly received by the British public, who were excited to see this indigenous African monarch. Interestingly, 18 Melbury Road also includes a blue plaque of William Holman Hunt, a Pre-Raphaelite painter.

Another of the most iconic blue plaques in the royal borough of Kensington and Chelsea can be found at 18 Hyde Park Gate. Commemorating the life of one of Britain’s most celebrated politicians, Sir Winston Churchill, this plaque is one of the most eagerly sought out in the area.

Arctic explorer, Scottish sailor and skilled surgeon, John Rae is famed for mapping over 600 miles of Arctic coastline in northern Canada. His biggest accomplishment was discovering the final part of the Northwest Passage, which was named the Rae Strait in honour of his accomplishments. Rae lived at 4 Lower Addison Gardens for many years, although upon his death in 1893 his body was buried at St Magnus Cathedral in the Orkney Islands – the place of his birth.

Another one of the most eagerly sought-out blue plaques in Kensington and Chelsea, the plaque honouring the achievements of Sylvia Pankhurst can be found at 120 Cheyne Walk in Chelsea. A key campaigner for the suffragette movement, she was an iconic figure in the fight for women’s rights in British society.

These are just some of the most popular blues plaques in the Royal Borough of Kensington and Chelsea. You can find the complete list, here!

Book Your Stay With Us…

Here at Central London Apartments, we respect the history and heritage of this culturally spectacular city. Our high-end apartment collection immerses guests within centuries of history and puts them within touching distance of an array of stunning landmarks and attractions.