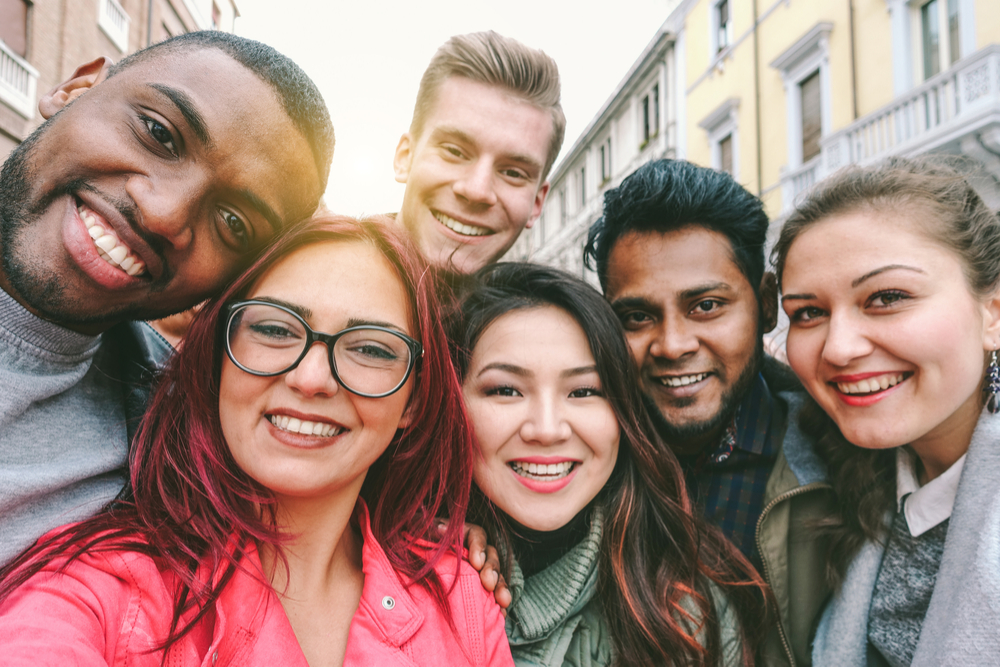 London is without doubt one of the most diverse cities in the world: a place where anyone, no matter their racial background or social demographic, can feel at home. More than 300 languages are spoken on its streets and, of the 10 million or so people living in London, roughly 37% were born outside the UK. Each district tells a different story, and wherever you go you’ll encounter different nationalities, religions, and tastes which manifest themselves in everything from food to fashion.

But the city wasn’t always this way. Only with the rise of industry and globalism, has it gone from being an ancient settlement to a cultural melting pot. Since the mid-18th century onwards London has opened its doors to people from all over the world, many of whom have come play a key role in the shaping of its identity. Some have quickly integrated into society whilst others have gone on to form their own communities within its borders.

We love how cosmopolitan London is and believe this to be one of the principal reasons why so many people choose to live here. Putting our research skills to the test, we reached out to a number of different communities in London, to hear their stories of how they’ve come to settle.

London’s German community falls somewhat under the radar. While well dispersed, it’s difficult to pin down to certain districts and boroughs, and it is considerably less visible than other ethnic groups. It’s believed that a German presence has existed in London for many centuries, helped along by union of the crowns of Hanover and England between 1714 and 1837. That union brought with it an increased German speaking community of scientists, businessmen, tradesmen, labourers and political refugees. Many were involved in East London’s sugar refining industry, and came to settle in Stepney, a historic area of Tower Hamlets.

Nowadays, much of London’s German expat population is said to reside in the London Borough of Richmond upon Thames, home of the German School of London. According to the school’s Assistant to Commercial Director and Board, Anne Gerstel: “The school itself has helped draw German’s to the area, particularly areas like Kingston and Ham.” She adds that many of the children at the school have German parents who live close by.

According to 2014 findings, the number of Spanish-born people living in London is thought to sit somewhere around the 43,000 mark, with Spaniards making their presence felt all over the city. While there are no specific Spanish districts in London, there remains a healthy array of Spanish-themed restaurants, bars and schools.

Sources indicate that the first major influx of Spanish people to London happened shortly after the Spanish Civil War in the 1930s, when political exiles flocked to places like Kensington, Chelsea, Camden and Westminster. Many came looking for work and education, following the economic crisis in Spain. The 1980s saw the coming together of Spanish and Latin American settlers in London who, in the midst of civil unrest, formed mixed communities.

These days, there are as many as 15,000 Spanish people living in North Kensington, and a number scattered around Notting Hill, Victoria and Wimbledon. According to Belen Sanchez, Academic and Student Life Coordinator for Battersea Spanish, a Spanish language school in Battersea: “Spanish people are everywhere in London.” She adds: “One of the great things about London is the fact that you can do anything. Spanish or not, this city offers everything you can think of.”

Of the Hindus living in London, the vast majority can be found west of river in areas like Neasden, Hounslow and Harrow, where they’ve established thriving high street businesses. Many share a home with Sikhs, who, similarly, have a big presence in Southall. Croydon and Tooting are where you’ll find London’s Gujarati Muslim community, who, again, have made a name for themselves on the high street.

For a glimpse into how London’s Sikh population is living, we spoke to S. Navraj Singh Cheema, Joint Secretary & Assistant Treasurer for the Gurdwara Sri Guru Singh Sabha Navraj - a Sikh Temple in Southall. “We’re hardworking and proud to be part of such a great city. Many of us moved here in the 1950s, and played a pivotal role in the Second World War where we served as soldiers for the British Indian Army.”

The Greek experience in London is one of good food and great churches. Bayswater plays host to the famous Greek Orthodox Church, Saint Sophia Cathedral, and is very close to the Greek grocery store, Athenian Grocery. Greek restaurants are dotted all over the city and are a staple among old and young people alike, whilst the British Museum in Bloomsbury has a section dedicated entirely to Ancient Greek culture.

Greeks are thought to have settled in London as early as the Middle Ages. Brothers Alexios and Andronikos, from Constantinople, a former city in the Byzantine Empire, were two of the first Greeks to come, and are recorded as having been resident in the city in 1440, after being granted permission to settle by King Henry VI. By 1670, that number grew to about 100, as Greeks fled the Ottoman Empire and its oppression of the Greek Orthodox Church.

Fast forward to the present day, and Greek people can be all over North London, specifically Palmers Green, Cockfosters, Edmonton, Wood Green and Harringay, where they share communities with their Turkish and Cypriot neighbours. A number of wealthy Greeks also have homes in Mayfair - London’s most elegant district.

According to Despina, owner of Despina Foods Ltd, “London’s Greek people are all-embracing, and, in the last 50 - 60 years have really made London their home.” She feels the city is really accommodating for people like her, and has given her opportunities that might be difficult to find elsewhere.

Nigerians have a long-history in London dating back some 200 years. Early generations arrived in small groups as ex-colonial officials and attendants to sea captains, and lived in dockside communities like Canning Town, while later generations found jobs running high street shops and other businesses.

Peckham is generally considered the epicentre for Nigerian life in London and has been that way since the 1970s and 1980s, when the first big wave of Nigerians came to London. There are over 300 Nigerian restaurants in the city, as well butchers, estate agents and hairdressers.

As John Inneh, Head of Welfare for the National Association of Nigerian Communities notes: “Nigerians are densely populated in South-East London, where they’ve formed communities and local businesses” He adds that outside of London, Nigerians have found homes in Manchester, Liverpool and Glasgow.

Did you know there’s an area in London called Little Portugal? It’s existed for roughly 30 years now and runs all the way from Vauxhall to Stockwell, south of the river. There you’ll find a bustling community of Portuguese speakers, along with Portuguese restaurants and shops. It’s believed there are more than 27,000 Portuguese people living in this part of London, which, incidentally, also has a large Brazilian community.

Portuguese people are cited as having first settled in London in the mid-16th century and led a somewhat secretive life to begin with. By the 17th century, an increasing number of Portuguese Jews had come to Britain to escape the Portuguese and Spanish inquisitions back home.

As things stand, Lambeth has the highest concentration of Portuguese-born residents, followed by Brent. Anna, Assistant Manager for Casa Madeira, is Portuguese and has been living in London for roughly 40 years. In her eyes, London’s Portuguese community has only really come into its own in the last 10-15 years, with the influx of more and more people to South London.

Where would London be without its beloved Italian community, and all of the great things it’s brought to the city? Since the 19th century, scores of Italians have arrived to the capital and made a home for themselves in places such as Clerkenwell and Soho. Some have gone on to open restaurants and coffee shops while others have taken up positions in creative industries.

All in all there are an estimated 200,000 registered Italians in London, and an equally impressive number of Italian eateries. No surprises then that the city has its very own Italian quarter in the form of Little Italy which covers Clerkenwell Road, Farringdon Road and Rosebery Avenue respectively. For a greater insight into London’s Italian community, I spoke to Maria Riccobono, Library Assistant at the Italian Cultural Institute, who moved to the UK roughly 30 years ago.

“When I first arrived, I didn’t bump into many people from back home, but, nowadays they’re everywhere.” She believes that Italians are well integrated in London to the point where “many of them forget their own country.”

Arabs are well represented in London, and originate from places as widespread as Egypt, Iraq, Somalia, Saudi Arabia and Morocco. Many reside in Greater London, and identify as students, business people and recent immigrants.

Edgware Road, with its offering of Middle Eastern restaurants and cafes, is distinctively Arabic, and has been that way since the late 19th century, when it first started to attract Arab migrants from the Ottoman Empire. From the 1950s onward,  Egyptians began to settle in the area, along with Algerians, and Lebanese people. Wealthy Gulf Arabs have, likewise, setup shop in Knightsbridge, home of supercars and luxury chain stores. As Saudi citizen, Othman Al Omeir, observed in an earlier article for Arab News: “What makes Knightsbridge so popular [with Arabs] is the luxury ambiance the area brings from its high-end stores, brands and fine dining.”

It’s hard to talk about diversity in London without touching on the French community. From as far back as the 11th century, French people have called this city home, and made a definite impact socially, politically and economically. The Famous Norman Conquest of 1066 brought with it French Aristocracy to British soil, while in the 16th and 17th centuries, and an increasing number of French Protestants were forced to flee to East London.

It’s estimated that there are as many as 400,000 French people in the city, making London one of the largest French conurbations in the world. For a true taste of French London, you need only head to South Kensington, home of the French Consulate and the Embassy of France. South Kensington, likewise, plays host to an impressive number of French schools such as Institut français du Royaume-Uni. There’s even a French cinema in South Kensington called Cine Lumiere.

Similar hubs in London include Westbourne Park - known for its famous French restaurant, the Ledbury - and Marylebone, where visitors can marvel at the many French paintings on offer at the Wallace Collection. A French influence can, similarly, be observed in London’s architecture, specifically Gothic Revival buildings like St. Pancras Railway Station and Tower Bridge.

Caravansérail, a French book store in Shoreditch, prides itself on bridging the gap between art and literature by providing a welcoming space for visitors to unwind in. Anne, one of the shop’s founders, has been in London for a year and half, and makes the important distinction of pointing out that French people in London hail from all over the world, and don’t necessarily have to be French born. She believes that London is not so much a place that French people have helped to create as a city that offers wide-ranging French experiences.