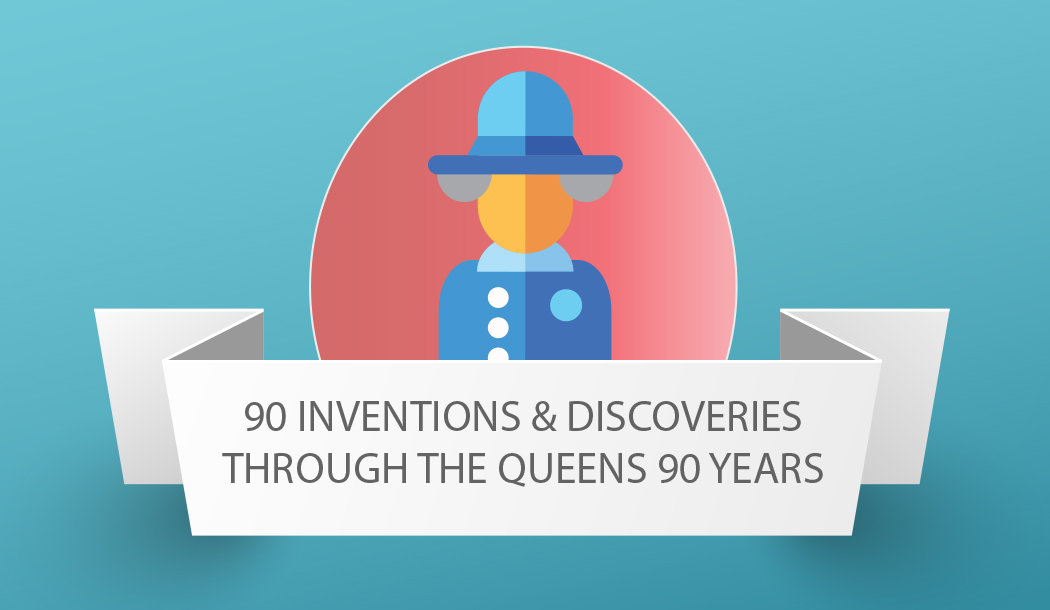 1st June 2016 in Things to Do by Francis Buchanan

As Queen Elizabeth II celebrated her 90th Birthday and became the longest serving monarch in April this year, we looked back at all the innovations she has witnessed over her lifetime. As well as witnessing major historical events, medical advancements and great technical innovations, Her Majesty has also seen the birth of things we now consider quite mundane.

From sliced bread and post-it-notes to the invention of computers and satellites, Her Majesty has witnessed it all! So much in fact that the millennial (Gen Y) and post-millennial generation might not even realise the technology they use widely today is actually fairly new. Some were even born after some of these inventions had already become the norm, so in our infographic we explore all the Queen has seen in her 9 decades and remember a time where our everyday gadgets were still technological breakthroughs.

1926 – The Queen was born in the same year Winnie the Pooh was published for the first time. 9 decades and 4 royal generations later, Pooh Bear is now a childhood staple in the UK.

1928 – Ever heard the saying “the best thing since sliced bread”? That’s because sliced bread wasn’t the norm until 1928.

1932 – Mars Bars go on sale for the first time. As an 8 year-old, Princess Elizabeth might have appreciated this particular invention.

1936 – All kids watch TV? Not quite. Her Majesty was 10 before she could watch it, as BBC Television only started its regular broadcast in 1936. This was also the year her uncle, Edward VIII, abdicated the throne and made her a presumptive heir to the British Crown.

1937 - the 999 Police Emergency Number we all know so well today receives its first call and Sellotape goes on sale.

1940 – Nylon started being used in the production of stockings, a fashion accessory all women of the era were soon used to.

1942 - A purified form of Penicillin becomes available for the military as a generic antibiotic. While other forms were available before then, a lot of the earlier attempts to create an antibiotic drug were actually toxic to humans, so it was a good job young Elizabeth didn’t have a serious or prolonged bacterial infection before she was 16!

1943 – Children’s toy The Slinky first went on sale when Princess Elizabeth was 17.

1945 – World War II ends and both Princess Elizabeth and her sister Margaret celebrate the victory of the Allies in the streets of London.

1947 – Elizabeth marries Prince Phillip. She used coupons to buy the raw materials for her dress, as she wanted to pay her respects to the hardship British people were facing in post-war Britain.

1949 – Weather forecasts become regular and disposable cameras go on sale - the Queen is reported to be a keen photographer.

1950 – Disposable nappies go on sale for the first time in the UK. Just in time for Princess Anne’s birth.

1951 – Power Steering starts being used in passenger carrying vehicles. Queen Elizabeth would have appreciated this, not only because it made turning a car less of a workout, but also because she served as a mechanic and driver with the Women’s Auxiliary Territorial Service during World War II. She is today the only surviving Head of State to have served in uniform on WW2.

1952 – DNA is confirmed to have a role in heredity - one of medicine’s greatest breakthroughs.

1953 – At 27 and one year after her father’s death, Princess Elizabeth is crowned Queen of England.

1954 – Teflon starts being used on the ancestors of the non-stick pans we use today. An innovation the Queen would have appreciated as she is said to wash the dishes by hand after barbecues at her Balmoral residence.

1955 – After years of killing or making thousands disabled, a vaccine for Polio is finally available. Good news for then 7 years old Prince Charles and 5 years old Princess Anne.

1957 – The Queen was just into her 30s when the then Soviet Union successfully launched The Sputnik, the first satellite placed into orbit. Satellites have since revolutionised the way we communicate and share information.

1958 – Children’s television programme Blue Peter airs and Super Glue and Velcro go on sale for the first time.  The Queen, however, isn’t awarded a Gold Blue Peter badge until 2001.

1959 – Post codes are introduced to the UK and the iconic and much loved original Mini goes on sale as an economy vehicle.

1960 – The first episode of Coronation Street is aired. The Queen is rumoured to be a fan and has visited the set of the programme. This was also the year Prince Andrew was born.

1961 – The birth control pill is introduced in the UK.

1962 – saw the release of the iconic compact cassette tape and the invention of LED lighting.

1963 – The first episode of Dr Who was aired by the BBC when the Queen was 37. Her Majesty is rumoured to be a big fan and have followed the show from the very beginning.

1966 – The first ever credit card is issued in the UK and the Queen and Prince Phillip watch England win the World Cup final at Wembley Stadium.

1967 – A few interesting things happened this year; countertop microwave ovens went on sale for domestic use, the world’s first ever cash machine was put into use in London, and BBC Radio 1 aired for the first time. It wasn’t until The Queen was 41 that colour TV was available in the UK and BBC2 broadcasted in colour for the first time, followed by BBC1 in 1969.

1969 – The internet goes live, albeit much smaller, and the world stops to watch Neil Armstrong walk on the moon.

1970 – Pilton Festival takes place in the Bath and West Showground for the first time. This went on to become the prestigious Glastonbury Festival, visited by Prince Charles and attended by Prince Harry.

1971 – Did you know it was only in 1971, when the Queen was 45, that the shillings officially became pence, the cents of the British Pound currency? Until then, there were 20 shillings to a pound and 12 pennies to a shilling.

1974 – The first British McDonald’s branch opens in London. Her Majesty is reported to be the landlady of a branch in Windsor.

1977 – Home computers are introduced to the market, although they don’t become popular until the 1980s, and the first Star Wars film releases in the cinemas. The first Brit Awards take place to celebrate the Queen’s Silver Jubilee and Her Majesty becomes a grandmother for the first time at the age of 51.

1978 – The first IVF baby is born and biosynthetic ‘human’ insulin is produced for the first time.

1979 – Despite being launched and failing in 1977, Post-It Notes are relaunched in 1979 and stick (pun intended). Margaret Thatcher becomes the first female UK prime minister. Thatcher had reportedly sent the Queen a pair of rubber gloves as a gift, after witnessing Her Majesty washing the dishes bare handed after a Balmoral barbecue.

1984 – Discman, the compact disc (CD) version of the Walkman, enters the market. Prince Harry is born.

1985 – British soap opera EastEnders broadcasts for the first time. Although mobile phones became commercially available in 1983, it wasn’t until 1985 that the first mobile phone call was made in the UK.

1989 – Game Boy goes on sale. Something the Queen’s grandchildren might have enjoyed.

1991 – Worldwideweb (www) became an available service on the internet when The Queen was 65.

1994 – The National Lottery has its first draw and Sony launches the PlayStation game console. The Channel Tunnel linking the UK to France opens, and both the Queen and the President of France attend the event.

1997 – Portable defibrillators and Plasma TVs become available. This was also the year Princess Diana died, forcing a change to the protocol on the flying of flags above Buckingham Palace. Previously, a flag would never be flown at half-mast.

1999 – Stem cells research proves they can be used to regenerate tissue and TiVo introduces the concept of TV on demand. The Euro becomes the currency of the European Union.

2001 – Wikipedia goes live and in November of the same year, at the age of 75, the Queen gains a dedicated page. The 09/11 attacks take place in America.

2002 – Freeview launches in the UK and picture phones enter the market. Her Majesty celebrates her Golden Jubilee and mourns the death of both her mother and her sister.

2003 – Wi-Fi changes the speed and the availability of the internet. Skype launches and allows you to video call across the world for free. Human Genome Project, which aimed to map human DNA, is pronounced complete two years ahead of schedule.

2004 – The first e-reader using electronic paper hits the market and Facebook launches. The Queen opens her Facebook account in 2010, when the British Monarchy Page goes live.

2006 – Nintendo Wii goes on sale and Twitter goes live, although the Queen only joins Twitter in 2009 when Buckingham Palace starts tweeting daily updates.

2007 – iPhone goes on sale. The Queen reportedly used the help of her grandchildren to keep up to date with technology.

2010 – iPad, the first mass-market tablet with finger-friendly multi-touch and dedicated operating system technology, goes on sale and electric family cars become available in the UK. The Queen becomes a great-grandmother for the first time at the age of 84.

2012 – 3D printers are introduced at market entry level and the Queen celebrates her Diamond Jubilee.

2015 – Prince Charlotte is born and Her Majesty becomes the UK’s longest-reigning monarch.